Meet my apple pie cinnamon rolls! My Autumnal take on the classic cinnamon roll is made with a simple yeasted dough, filled with a sticky cinnamon filling and laced with chunks of grated apple.

These are the perfect thing to bake on a cold Sunday this Autumn. If anything, do it for the smell of baked goods in the oven. Someone really ought to make that into a candle already.

You can find the full recipe and instructions at the bottom of this blog post.

Prepare a simple yeasted dough then knead and prove for 1 hour until doubled in size (photo 1). Meanwhile, prepare the filling by mixing together butter, brown sugar, grated apple, and lots of cinnamon (photo 2).

Pinch the dough to seal the edges then slice the log into nine rolls. Place the rolls in a baking tray (photo 4) then leave to prove for another 30 minutes until puffy (photo 5). Then bake the cinnamon rolls until golden brown (photo 6) and serve with a simple glaze!

How to handle cinnamon roll dough

Are you a little bit scared of making bread dough? Here are a few tips to make sure your dough turns out perfect:

Note that proving times will vary based on the age of your yeast, the temperature of your proving zone, and how wet your dough is. After the first prove, your dough should have doubled in size. After the second prove, the cinnamon rolls should have filled out the dish (see photos 4-5 above for comparison).

I’ve proved my dough for 1 hour and it hasn’t increased in size! What should I do?

Your yeast may be out of date. Buy some fresh yeast and try this recipe again.

You may have also heated your milk too much – if the temperature is too hot, the enzymes in yeast will denature. You want the milk to be lukewarm – around 45°C/ 110°F. If in doubt, leave the milk to cool a little longer.

My cinnamon rolls are super dense. What’s wrong with them?

My cinnamon rolls unravelled whilst baking. How can I solve this?

If you like this recipe, be sure to check out my apple crumble muffins, caramelised banana oatmeal and authentic masala chai for more vegan breakfast inspiration.

I hope you enjoy this recipe! If you make it, please leave a rating + review below and share your photos on Instagram tagging #shivanilovesfood!

For the apple cinnamon filling:

For the glaze (optional)

Did you make this recipe?

Tag me on Instagram @shivani.lovesfood and use the hashtag #shivanilovesfood! 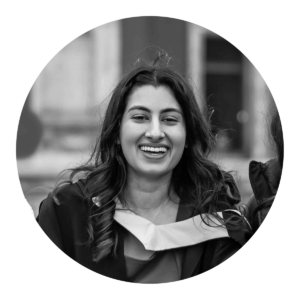 Welcome to my little corner of the internet! Learn more about me…